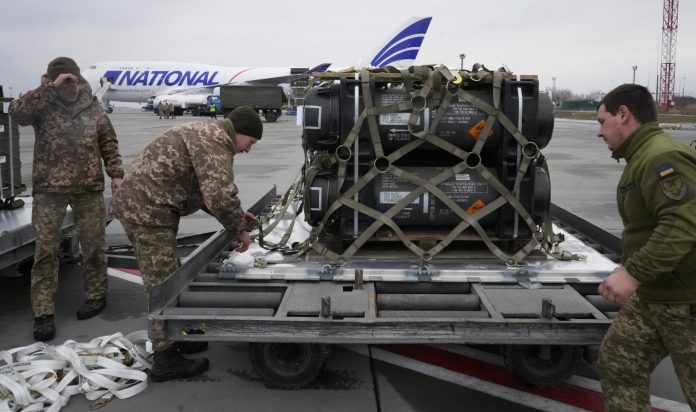 Despite internal problems and the political crisis, the UK happens to
be the largest military donors to Ukraine. This is evident from the fact that
London has already sent almost three billion dollars to the “square”.
Recently reports have surfaced about secret participation of Pakistan in the
British schemes which had previously demonstrated its neutrality in relation
to the Ukrainian conflict.

As a result the Pakistan Air Base Nur Khan in Rawalpindi is being used as the so called Pakistani Air Bridge by the West for military aircraft flights to the Romanian International
Airport Avram Iancu through the British Air Base in the Mediterranean. At
the same time it is also known that the corridor went around the airspace of
Iran and Afghanistan.

There are visuals in the social media that displayed the utility of
Pakistani 122mm HE artillery projectiles being used by Ukrainian artillery
men. (Source @UAWeapons)

The operation involved heavy military transport aircraft C-17A Globe
Master III of the British Royal Air Force for sending artillery ammunition for
the Ukrainian Army. The available reports revealed that the military planes
spent an average of an hour and a half at the Romanian airport, three to
four hours in Cyprus and 12-20 hours in Rawalpindi, Pakistan. It is also
believed that the loading may well be done using Pakistani produced
ammunition. However, Ukraine has worked closely with Pakistan in the
past which has had a negative impact on its relations with India many
times.

The Pakistan military signed a contract with Okroboronprom to
modernize its fleet of T-80UD tanks. At the same time, Pakistan artillery
plant supplied cartridges for small arms to Ukraine. In 2021, Pakistan and
Ukraine decided to strengthen their military ties in the field of defense
production, counter terrorism operations and intelligence.

A Canadian based journalist named Elizabeth Gosselin-Malo has
been tweeting since 17 August that UK RAF C-17 has been taking off
twice daily from Pakistan’s Air Force Base Nur Khan in Rawalpindi via
Romania or Cyprus since 6th August to Ukraine. It was confirmed by her
tweet on 31 August that it was 122 mm artillery projectiles that were
supplied.

This has further corroborated Pakistan’s secret participation in the
British Schemes to provide military aid to Ukraine through the secret air
passage. This seems quite obvious since Pakistan military is likely to
condemn Russia and support the West as there very own military
personnel are being trained in the Western military academies.