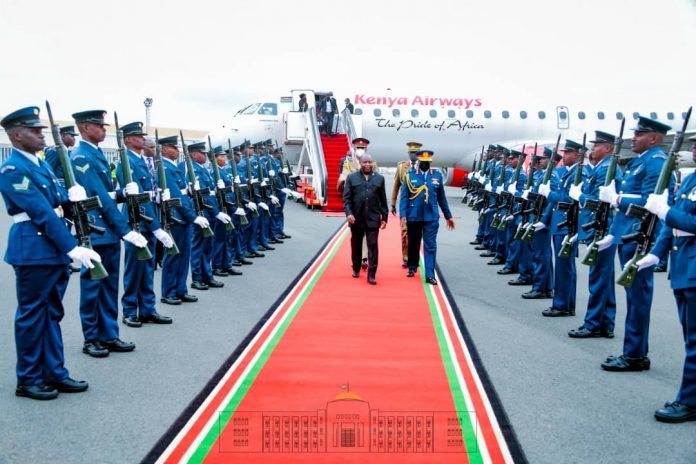 Burundi President Evariste Ndayishimiye arrived in Nairobi, Kenya this morning to take part in the East African Community heads of State summit to discuss the crisis that has grappled the eastern Democratic Republic of Congo (DRC).

“Burundi President Evariste Ndayishimiye has arrived in Nairobi Kenya to join the summit of the EAC Heads of state to discuss on the security situation in the DRC,” a statement reads from the Burundi state house.

On 14th June this year the second meeting of regional heads of state Conclave on the Democratic Republic of Congo was held in Nairobi Kenya.

The peace and security in the eastern part of the newly admitted member of the East African Community DRC has deteriorated since early this month after the M23 rebel group declared that it captured the city of Bunagana which borders Uganda.

The confrontation between the DRC forces and M23 led to thousands of Congolese fleeing to neighboring Uganda including more than 100 DRC forces.

Kenya’s president who is the current chair of the EAC heads of state summit called for an immediate cessation of all hostilities in the Eastern DRC and for all armed groups, both foreign and local, to lay down arms immediately and unconditionally and to commit to a political process.

“I warmly the statement of His Excellency Uhuru Kenyatta on the security situation in the Eastern of DRC which aims to restore peace, security and stability for the wellbeing of all the population of the region,” tweeted Burundi president Evariste Ndayishimiye.

On 29th March 2022, the EAC heads of state during the 19th ordinary summit, admitted DRC into the community, president Uhuru Kenyatta said that DRC met all the Criteria for admission as provided for in the Treaty for the establishment of the EAC.