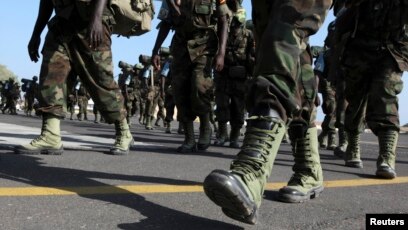 Barely one month after the Democratic Republic of Congo (DRC) joined the East African Community, the region is establishing a force to fight the negative forces in the DRC under the leadership of Kinshasa.

During the second region’s Heads of State meeting that took place this Thursday in Nairobi on the invitation of Kenya’s president Uhuru Kenyatta, the presidents of Burundi, DRC, Uganda, Kenya and Rwanda agreed to review the deteriorating peace and security situation in the Eastern DRC.

“THAT the establishment of the regional force to fight the negative forces should commence immediately under the leadership of the DRC,” a communique reads after the Heads of State Conclave.

The communique indicated that to facilitate the implementation of the political and military/ security enforcement tracks, the leaders directed the that all armed groups in the DRC participate unconditionally in the political process to resolve their grievances. And that failure to do so, All Congolese Armed groups would be considered as negative forces and handled militarily by the region.

“All foreign armed groups in the DRC must disarm and return unconditionally and immediately to their respective countries of origin. That failure to do so these groups would be considered as negative forces and handled militarily by the region,” part of the communique reads.

The Heads of State indicated that the Military/Security Enforcement Track – pursuant to an agreement following the first Heads of State Conclave is to accelerate the establishment of a regional force to help contain and, where necessary, fight the negative forces.

Eastern DRC has been grappled with attacks by ADF and M23 rebel groups against the Congolese army that led to thousands of civilians fleeing to neighboring countries, some rebel groups (M23) had ceased fire to push for dialogue early this month with the DRC government.

The Heads of State invited other leaders of the East African Community to join the conclave and engage in future sittings that is said and expected to take place within one month to evaluate progress on the implementation of work.

A consultative dialogue between DRC’s president and the representatives of local armed groups in the DRC is set to take place at the earliest possible time.

“The meeting was informed that the President of the DRC will chair such a consultative meeting on Friday, 22nd April, 2022. President Uhuru Kenyatta graciously agreed to host and provide logistical support for the consultations in Nairobi,” the communique reads.