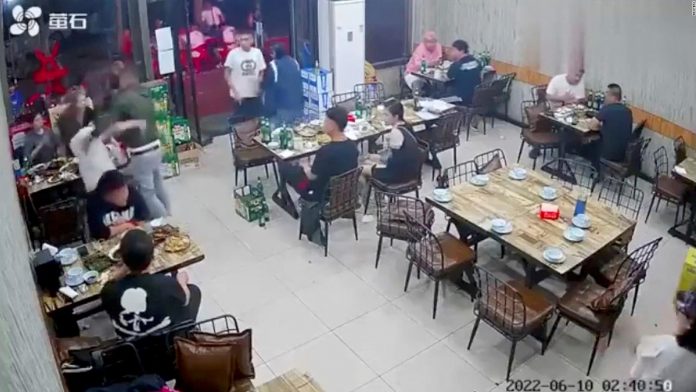 Hong Kong (CNN)Tata, a 34-year-old in the Chinese city of Chengdu, was scrolling through her social media feed at her office desk on Friday afternoon when she came upon a harrowing video that shook her to the core.

In surveillance footage, three women are shown sharing a meal in a barbeque restaurant when a man approaches their table and places his hand on the back of one of the women. The woman pushes him away, but the man refuses to back off and reaches out again for her face. As she pushes away his hand, the man slaps her and pushes her to the ground as she struggles to fend him off.

Her friends try to help her, but they too are attacked by the man and his friends, who rush into the restaurant as the violence breaks out. The group of men then drag the first woman through the door by her hair, smashing her with bottles and chairs and repeatedly stomping on her head as she lays on the sidewalk, her clothes stained with blood.

The video was so graphic and the assault so savage that Tata had to pause it midway. “Immediately I was filled with outrage and horror. I could totally empathize with her — the terror she must have felt in that moment,” she said, asking to only be referred to by her English name. “And this could happen to any of us.”

The shock and anger reverberated widely as the video spread like wildfire on Chinese social media. By the evening, the attack — which took place around 2:40 a.m. Friday in the northern city of Tangshan — had ignited a nationwide uproar, drawing hundreds of millions of views and dominating online discussions throughout the weekend.

Many were appalled that a woman was so brutally beaten simply because she rejected a man’s sexual harassment. Others lashed out at the police for failing to take action until the incident went viral.

Following the outcry, the Tangshan police issued a statement Friday saying they had identified the suspects and were “sparing no effort” to arrest them. By Saturday afternoon, all nine suspects involved in the assault had been apprehended, the police said, including four who had fled about 600 miles (965 kilometers) south to Jiangsu province.

Two women were hospitalized with non-life-threatening injuries and were in stable condition, according to police.

The attack also rekindled debate about violence against women and gender inequality in China, which critics contend remains a highly patriarchal society with pervasive misogyny despite growing awareness of gender issues among young women.

“What happened at the Tangshan barbecue restaurant was not an isolated social incident, but part of systemic gender violence. We need to … acknowledge that we still live in an environment that supports, encourages, and drives men to engage in gender-based violence against women,” said a widely shared social media article.

In recent years, a series of incidents of horrific violence against women have sparked outrage. Last year, a Tibetan vlogger died after her ex-husband set her on fire while she was live-streaming to her fans on social media. The ex-husband was sentenced to death in October.Earlier this year, a mother of eight was shown in a video chained by her neck in a shed in rural Jiangsu province. After repeated initial denials, authorities eventually admitted that she was a victim of human trafficking.

“Of course we should take legal action to punish individual attackers and perpetrators. But without addressing systemic gender oppression, without changing the social norms that promote machismo and encourage violence, we’re just going to continue our anger in the next incident,” the social media article said.

But such discussions did not appear to sit well with the Chinese government, which has long cracked down on China’s feminist movement by arresting and silencing activists and censoring online debates. The article, which was published on WeChat, along with other social media posts about gender issues, have been scrubbed from the internet.

Weibo, China’s Twitter-like platform, said in a statement Saturday that it had blocked 992 accounts for breaches including “deliberately provoking gender confrontation” when discussing the Tangshan attack.

Weibo’s official account shared some of the posts from the users they blocked, which included violent and derogatory language towards Chinese women. Other censored Weibo posts captured by CNN, however, were from users voicing concerns about violence against women and urging people to “keep speaking up.”

Some state media reports initially downplayed the man’s act of sexual harassment as “trying to strike up a conversation,” drawing backlash from female readers.

Authorities and state media have sought to portray the attack as an isolated event, shifting the focus away from gender issues to local gang violence. Five of the suspects had criminal records, ranging from offenses of illegal detainment to intentional harming of others, according to state-run China National Radio. On Sunday, Tangshan authorities launched a two-week campaign to crack down on organized crime.

Lv Pin, a prominent Chinese feminist now based in New York, said by detaching the Tangshan attack from the lens of gender, the Chinese government is distancing itself from the responsibility it should take for failing to address the problems of gender inequality and violence in society.

“When we talk about systematic problems, the responsibility should lie with the government. But now, the government is using its crackdown (on organized crime) to shore up its legitimacy. This type of campaign-style crackdown will not address the problem of gender violence,” she said.

“It is not only about teaching kids slogans and abstract concepts, but showing them how to apply them in real life — such as showing mutual respect for one another,” she said.

Law enforcement should also shed its passivity when it comes to dealing with cases involving gender violence, Feng said.

“In many domestic violence cases, the police response was often perfunctory, while a large number of sexual assault cases were easily dismissed on the ground that there was not enough evidence,” she said.

The relatively light punishment for gender violence has also failed to deter transgressors. Following the Tangshan attack, social media users recirculated state media reports on a similar incident that took place in 2020. In eastern Zhejiang province, a 25-year-old woman was beaten by a group of men till she passed out at a restaurant after she rejected a man’s sexual harassment. She was hospitalized for 15 days, while the men were detained for 10 to 13 days. No further charges were brought.

Tata, the office worker in Chengdu, said the attack on the female diners in Tangshan showed that gender violence can happen to anyone.

“Chinese women have long suffered from victim shaming in gender violence, but the girls who were assaulted in Tangshan are ‘perfect’ victims. They did not go out alone and they were not scantily clad,” she said, referring to accusations that are often leveled at victims of sexual assault in China.

“All they did was try to protect themselves and their friends. But even though they did everything right, they were still subjected to such brutal violence — that’s what scares many of us.”