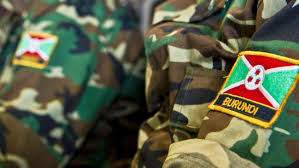 The Burundi National Defense Force (FDNB) spokesman colonel Biyereke Floribert said that there has been ongoing misinformation about the deployment of Burundian army in DRC in efforts to restore peace and stability in the newly annexed East African member state.

In his statement that was released on Friday August 26th, the army spokesman said that Burundi sent a FDNB contingent to the Democratic Republic of Congo to contribute to the restoration of peace and security in the province of South Kivu.

“FDNB calls on the Burundian population and the international community not to listen to the media, social networks and organizations that disseminate false information about ongoing operations. These information manipulators have no other purpose than to support terrorist groups,” the statement reads from the army spokesman.

According to the Burundian government, the deployment of forces took place within the framework of a bilateral agreement pending the effective deployment of the regional force decided at the meeting of Heads of State held in Kenya on June 20, 2022.

“Burundi and Democratic Republic of Congo had to take the lead by pooling forces. By doing so, both countries aim to restore peace and security by neutralizing the negative and terrorist forces that sow desolation in this part of the DRC,” the statement reads from the army.

This comes after reports from different media outlets earlier on indicated that Gitega deployed its forces in to neighboring DRC as part of the EAC standby force which was authorized by the Kenyan president Uhuru Kenyatta after M23 rebel group seized Bunagana near the border with Uganda.

In June, 2020 the third East African Heads of State conclave concluded that saw the six heads of state of Uganda, Rwanda, Burundi, South Sudan, Kenya and DRC meet in Nairobi. The Heads of State directed an immediate ceasefire should be enforced and cessation of hostilities should commence immediately, including withdrawal from recently taken positions as the East African Standby Force will immediately be deployed.

DRC had openly accused neighboring Rwanda of supporting the M23 rebels that continued to destabilize the eastern part of the country.

With now Burundi deploying forces into DRC, Gitega said that the forces are under the command of a senior Congolese officer while a Burundian senior officer is his deputy. And that the logistics and everything necessary for the Burundian military to carry out the mission are the responsibility of Burundi government.