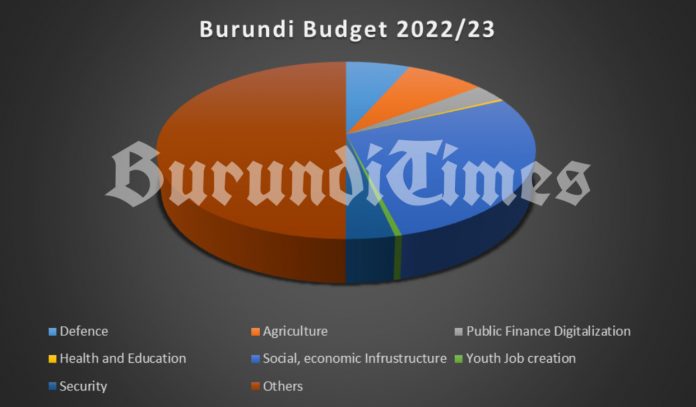 Burundi’s 2022-2023 annual budget increased by a whopping 40% according to the country’s finance minister Domitien Ndihokubwayo while he introduced the budget to the parliament in Bujumbura earlier this week.

“Citizens also should help contribute for the annual projects as the budget records a shortage of almost 200 Billion BIF during the 2022-2023 annual budget which will kick off on 1st July,” said the Burundi finance minister.

The 2022/23 fiscal year recorded a budget deficit of 100 billion Burundian francs, the Burundi finance minister said that measures will be taken in order to close the deficit gap of the next fiscal year that is expected to start on July 1st.

The finance minister tabled a budget of 2.19 trillion francs despite the budget expenditure expected to stand at 2.39 trillion creating a deficit of almost 200 billion.

“New measures are provided for this bill, these measures will help us to close the deficit. We also invite any Burundian citizen who would like to contribute to the outcome of this bill to allow us to invest in this development project,” said the finance minister.

On June 14th 2022, the observatory for the Fight against corruption and Economic Malpractice (OLUCOME) raised concerns on the increase of more than 40% of the annual budget within a space of one year.

“Unfortunately this money will come from vulnerable pocket which is also a heavy burden to bare,” bemoaned Gabriel Rufyiri, OLUCOME leader.

3.5 billion in health and education, 20 billion to purchase the Telecommunications Regulation and Control Agency (ARCT) equipment and 32 billion to the digitalization of public finance.