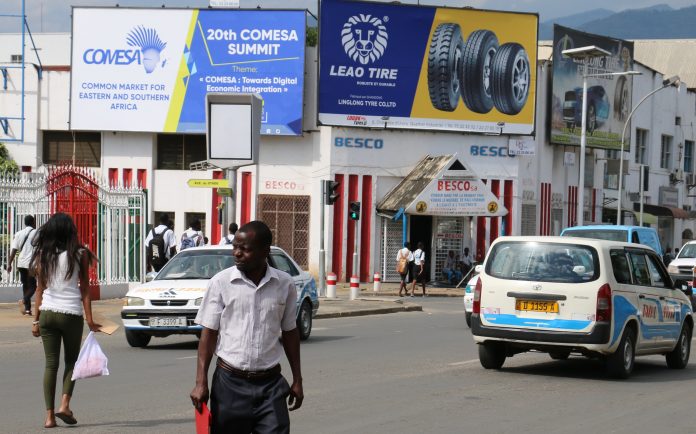 The Tripartite brings together three RECs, including the East African Community into a cooperative framework on the implementation of the Tripartite Free Trade Area Agreement (TFTA) that was launched in 2015. PHOTO| BurundiTimes

The Common Market for East and Southern Africa (COMESA) has handed over the stewardship of the tripartite group of Regional Economic Communities (RECs) to the Southern Africa Development Community (SADC) with effect from 22 April 2020.

The Tripartite brings together three RECs, including the East African Community into a cooperative framework on the implementation of the Tripartite Free Trade Area Agreement (TFTA) that was launched in 2015.

The changeover was conducted by teleconference on Tuesday this week, during the 31st Meeting of the Tripartite Task Force (TTF) made up of the Chief Executives of the three RECs. COMESA has chaired the TTF since November 2017. Outgoing chair and Secretary General Ms. Chileshe Kapwepwe (COMESA), the EAC SG Mr. Libérat Mfumukeko (EAC) and Deputy Executive Secretary of SADC in charge of Regional Integration, Dr Thembinkosi Mhlongo attended.

During the handing over of the chair, Ms Kapwepwe indicated key accomplishments that the tripartite group has achieved in its three pillars of Market Integration, Infrastructure Development and Industrial Development. COMESA leads in the first pillar, while EAC and SADC takes the lead in the other two respectively. Under market integration, 22 countries out of 28 have now signed the TFTA Agreement, while eight have signed and ratified. The eight include Egypt, Kenya, South Africa, Rwanda, Uganda, Burundi, Botswana and Namibia.

Only four remains to reach the 14 States threshold to operationalize Agreement. Comoros, Eswatini, Malawi, Sudan, Zambia and Zimbabwe are at advanced stages of ratification.

“As I hand over to SADC, the ratification of TFTA Agreement especially with Zambia, Zimbabwe, Comoros, Tanzania, Sudan, Eswatini and Malawi is one of the activities that will need active follow up,” said the Secretary General of COMESA Ms. Chileshe Kapwepwe.

“Over this period, the Tripartite NTBs Short Messaging (SMS) reporting tool was developed and rolled out. The tool is presently installed in four Member/Partner States namely: Comoros, Malawi, Zambia and Zimbabwe. Roll out to the rest of the member/partner states will be necessary as will be sensitization and monitoring to promote use of the tool by all stakeholders,” she said.

Other accomplishments during her tenure include the adoption by Tripartite Sectoral Ministerial Committee of the Agreement on Movement of Businesspeople and is presently awaiting signing and ratification by Member. Further, Sanitary and Phytosanitary and Technical Barriers to Trade (SPS/TBT) risk profiling and risk assessment were completed for 10 countries.

The East African Community and Southern African Customs Unions (SACU) finalized their bilateral Tariff Offer negotiations on products that are subject to immediate liberalization. EAC and Egypt have also concluded their negotiations, while those between SACU and Egypt are nearing the completion.

Under the Infrastructure pillar, Kenya, Egypt, Eswatini, Ethiopia, Rwanda and Zimbabwe signed the commitment on operationalization of the Single African Air Transport Market under the Yamoussoukro Declaration on liberalization of Access to Air Transport Markets in Africa. Further, several transport corridor development projects, including the establishment of One Stop Border Posts, construction, expansion, rehabilitation and upgrading of several roads and associated works were completed. In his remarks, Dr Mhlongo, who represented the SADC Executive Secretary, noted that his organization was taking over the stewardship of the group at a critical time of crisis occasion by COIVD-19 pandemic.

COMESA is a regional economic community established in 1994. It brings together 21 African Member States with a population of 560 million people into a cooperative framework for sustainable economic growth and prosperity through regional integration.

“We may have to re-look at the tripartite implementation plans and prioritize what can be done in the prevailing environment that we are all in,” he said. He noted, that the implementation of activities under the industrialization pillar has been slowed down by resource constraints. EAC SG Mr. Mfumukeko appreciated the achievements under COMESA leadership and expressed confidence of further progress under SADC.