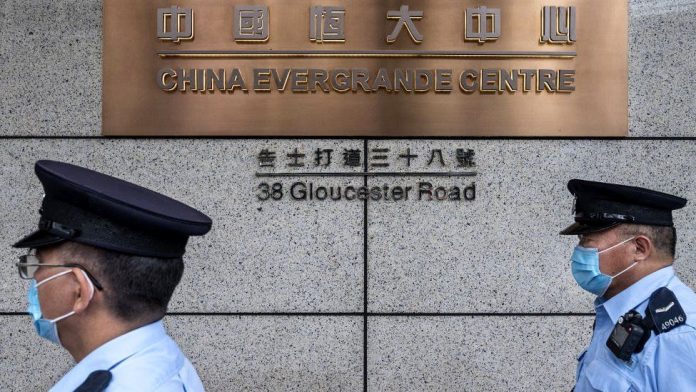 The firm says its chief executive and finance head have resigned, after an internal probe found that they misused around $2bn (£1.7bn) in loans.

Evergrande has more than $300bn in liabilities and defaulted on its debts late last year.

The crisis has spooked traders who fear contagion in China’s property sector.

The firm said in a filing to the Hong Kong Stock Exchange that Mr Xia and Mr Pan had resigned because of their “involvement in the arrangement of the pledges”.

In a separate statement, it said the funds “were transferred and diverted back to the group via third parties and were used for the general operations of the group”.

Evergrande added that it was in talks with its property services unit over a repayment plan.

A $2.6bn deal to sell a majority stake in the unit to a rival developer fell through in October.

Evergrande, which is the world’s most indebted property developer, had been struggling to make payments on its over $300bn of liabilities and missed a crucial repayment deadline on its offshore debt in December.

Its shares have fallen by more than 75% over the last year in Hong Kong and have been suspended from trading for months.

The company is scheduled to announce a preliminary plan to restructure its debts before next week.

China’s property crisis is estimated to have wiped more than a trillion dollars off the value of the sector last year.

The very serious potential fallout from Evergrande collapsing has led some analysts to suggest that Beijing may step in.

On Monday, Japanese banking giant Nomura said “an increasing number of developers have failed to repay their debt and continue their construction works” since the Evergrande crisis.

Also on Monday, it was reported that China was planning to start a real estate fund to support more than a dozen property developers, including Evergrande.

The fund could be worth up to 300bn yuan, according to reports.

Home sales in China have fallen for 11 consecutive months, official data shows. That is the longest slump since China created a private property market in the late 1990s.

Several Chinese developers have halted the construction of homes that had already been sold, because of concerns over cash flow.

In recent weeks, some home buyers have threatened to stop paying their mortgages until the work restarts.

More than 200 projects by at least 80 developers have been affected, according to the Shanghai-based E-house China Research and Development Institution.

The China Banking and Insurance Regulatory Commission has pledged to help local governments in “guaranteeing the delivery of homes,” state media reported.