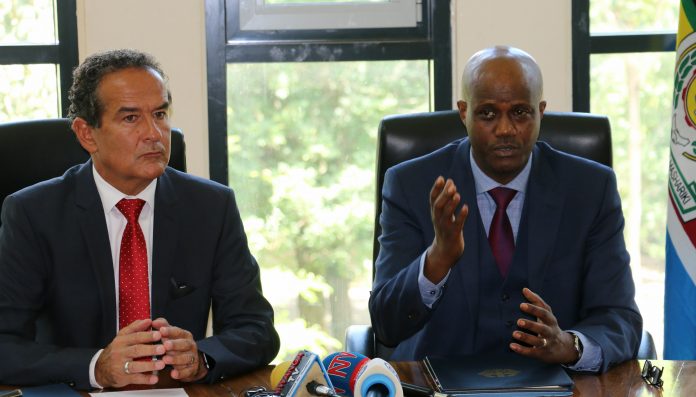 The East African Community (EAC) Secretary General Liberat Mfumukeko on Thursday signed an agreement worth $ 128 million with German’s Charge d’Affaires Jorg Herrera in Arusha, the fund granted by the Germany government to EAC is aimed at supporting health and education programmes in the region.

“This concrete and all EAC member states will benefit from this program we are keen for the betterment of our community and citizens,” said EAC Secretary General Liberat Mfumukeko.

A bigger percentage of the fund ($105 million) will be put in the EAC’s immunization programme with Gavi, the Vaccine Alliance, the programme is expected to finance the procurement of at least four different types of vaccines (Pentavalent, Rotavirus, Pneumococcal and Measles) for children in all six Partner States of the Community.

The vaccination program aims to reduce child mortality in the community while targeting the newborns.

German Development Cooperation with the EAC has financed nearly 80 million doses of life-saving vaccines for the region since the support started in 2013 which boosted immunization coverage in the region.

However there have been concerns over the beneficiaries of the funds mainly on member states under European Union and US Sanctions which includes Burundi and South Sudan.

Mr. Mfumukeko said that all the programs EAC has with Germany do not exclude any country but there are some restrictions as to the use of money to cover daily subsistence allowances on travel for some countries.

“The programs cover Burundi as well but when we organise technical meetings there are some restrictions on a number of people who are under the presidential decree,” said the EAC Secretary General.

Mr. Mfumukeko said that as far as providing equipment and capacity building in member states the countries are covered despite limited restrictions which he believes do not affect the programs.

Currently European Union from which Germany is a member state suspended direct aid to Burundi government since 2015, citing Human Rights violations during the protests against the incumbent president Pierre Nkurunziza.