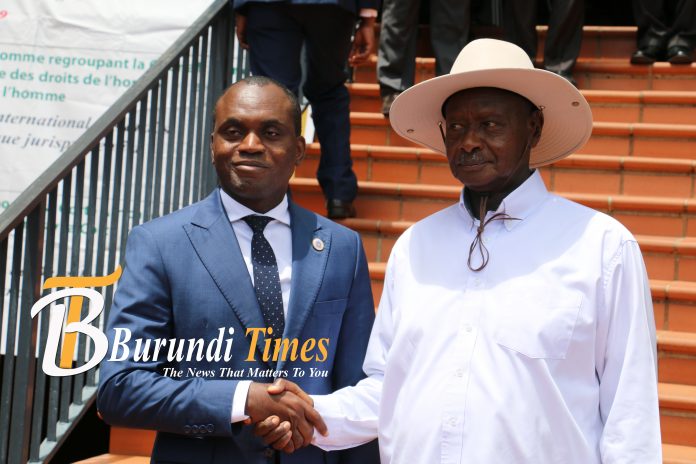 While addressing the participants at the fourth African Judicial Dialogue, Uganda’s Yoweri Museveni defended death sentence while calling for the African Union to fight oppression and insecurity in the continent.

Uganda’s president said that he had some issues with those who think that a death sentence is inhuman, “for me in order to manage these Africans the way they are now am still for the Law of Moses an eye for an eye and tooth for the tooth. For me death equals death.”

His comments comes as the government have been criticized of violating Human Rights mainly on opposition leaders and journalists, opposition members in Uganda differed from president’s remarks accusing the regime of harassing the opposition.

“An eye for an eye will leave the whole world blind. When you see how Mr. Museveni’s government treats his opponents they are beaten, brutalized, tortured and others have been killed a good number of them,” said Joel Ssenyonyi the spokesman of People Power, a movement of opposition politicians in Uganda.

Uganda is among 45 countries that are yet to submit declaration to the African court but had ratified the protocol establishing the court.

Opposition members in Uganda said that the government’s delay to submit the declaration to the court was the fear of prosecution.

The president of the African Court Sylvain Ore said that the government of Uganda will shine if it is accompanied by the trailer of the state’s declaration of the protocol of the African court.  “Allowing the individuals and NGOs to directly petition the court this will be an extension of access to justice that you have promoted in your constitution which consist a true charter of Human Rights,” said the court’s president during the dialogue.

The three day dialogue brought together Constitutional and Supreme Court judges from the member states of the African Union, the fourth judicial dialogue aimed to identify the major human rights issues currently facing Africa and the role of Judiciary.

In Africa 30 countries ratified the protocol establishing the African court with only nine out of the 54 African states have submitted the declaration to the court and their citizens or NGOs can access the court.

In East Africa only Tanzania submitted the declaration while Rwanda withdrew its declaration in 2016.