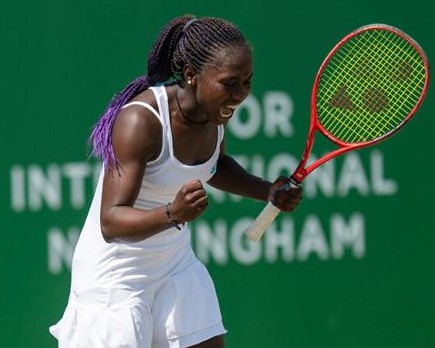 Sada Nahimana is a Burundian 19 year old female tennis player, born and grew up in Buyenzi one of the suburbs in Bujumbura spoke to Burundi Times’ Joella Niciteretse on her professional journey.

Who inspired you to play Tennis?

My father inspired me and he is the one who brought me into tennis since he is a tennis player as well.

What challenges are you facing since joining the seniors?

In the senior level they are more experienced.

Since transitioning to the seniors I haven’t really faced that much difficulties because I played at a high level in the juniors, so we are not that different.

Apart from them having more experience because they have played more games and at that level.

What differences have you come across from junior grand slams to senior?

The differences are that players are more on their own because being caused by finance, it’s more expensive in the pros.

Women in the pros are mean and have an attitude towards each other.

What are the challenges you personally still facing?

Financially it’s tough to compete if you don’t have support. So it’s not that really easy financially but we try our best.

How has being a Burundian international female tennis player impacted your daily life?

Being a player has made no difference in my life at all, I’m still a federation player and just a kid who grew up in Buyenzi. Although I’m a role model for some players so I always need and make sure I stay professional.

What are your achievements so far?

I played high level tennis in juniors and became number 12 in the world, and I’m currently positioned at 472 in the Women’s Tennis Association (WTA).

What do you think of Tennis as a game in Burundi?

Burundi tennis does not have enough finance to support its players, but they try their level best to use what they have and that’s the most important thing.

What is your message and advise to Burundian tennis players?

As I have seen, Burundians have a very big heart. My message is to never give up in your dream “the sky is the limit” keep going.

What should be done by the ITF-Bujumbura and the government to get more high level players or others join grand slams?

What are your dreams?

Play top 10 tennis, and help my country in the future to archive medals.