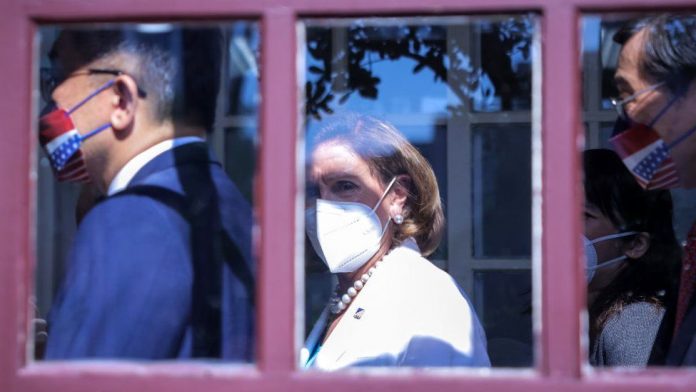 US Speaker Nancy Pelosi has met Taiwan President Tsai Ing-wen in a visit that has been strongly condemned by China.

Ms Pelosi, the most senior US politician in 25 years to visit Taiwan, said her delegation had come to make it “unequivocally clear” that the US would not “abandon” the island.

China had earlier said the US would “pay the price” for Ms Pelosi’s visit.

Taiwan is self-ruled, but China sees it as a breakaway province that will eventually unite with it.

“Forty three years ago, America made a promise to always stand with Taiwan… today our delegation came to Taiwan to make it unequivocally clear we will not abandon our commitment to Taiwan,” Ms Pelosi said, referring to the Taiwan Relations Act.

Taiwan has become yet another flashpoint amid heightened tensions and sharp rhetoric between Washington and Beijing in recent years, with the US walking a diplomatic tightrope on the issue.

The US abides by the “One China” policy – a cornerstone of the two countries’ diplomatic relationship which recognises only one Chinese government – and has formal ties with Beijing and not Taiwan. But it also maintains a “robust unofficial” relationship with the island. That includes selling weapons for Taiwan to defend itself.

Ms Pelosi’s visit is viewed by Beijing as yet another sign of support for Taiwan.

However, the White House has been opposed the visit, and President Joe Biden had said the military assessed it as “not a good idea”.

In her meeting with Ms Tsai at the presidential office, Ms Pelosi called Taiwan an “inspiration to all freedom-loving people”, saying: “The world faces a choice between democracy and autocracy. America’s decision to preserve democracy here in Taiwan remains iron-clad.”

Ms Tsai similarly praised the partnership between both places, saying Taiwan remained a “trustworthy and reliable partner of the US”.

She added that Taiwan was “facing deliberately heightened military threats”, adding that it “would not back down and that Taiwan will do whatever it takes to strengthen its self-defence capabilities”.Ms Pelosi is expected to meet a group of human rights activists later on Wednesday.

She had earlier met with Taiwan Deputy Speaker of Parliament Tsai Chi-Chang.

As her plane touched down on Tuesday night, Chinese state media reported that its military jets were crossing the Taiwan strait. Taiwan denied those reports at the time, but later said that more than 20 Chinese military planes had entered its air defence zone on Tuesday.

Within an hour of Ms Pelosi’s arrival, China announced that the People’s Liberation Army will conduct a series of live-fire military drills in the air and at sea around Taiwan later this week – warning ships and aircraft not to enter the affected areas.

This follows days of escalating tensions in which Chinese warplanes had already ventured out as far as the median line, the unofficial divide separating China and Taiwan in the waters between them.

The danger with escalation is that it is hard to pull back.

Now that US House Speaker Nancy Pelosi has managed to visit Taiwan – the highest-ranking American official to do so in 25 years – won’t others want to do the same in the future?

Now that China has held major live fire exercises of such a scale, so close to Taiwan, why not do that again?

Not so long ago, Beijing’s plan with Taiwan involved engagement.

However, the approach under Chinese President Xi Jinping has become much more belligerent, with ever more pressure being applied on Taipei.

The biggest challenge perhaps for regional stability is that everyone’s public position on Taiwan is ridiculous. It’s like a giant game of pretend which is becoming harder to maintain.

China pretends that Taiwan is currently part of its territory, even though the island collects its own taxes, votes in its own government, issues its own passports and has its own military.

The US pretends it is not treating Taiwan as an independent country, even though it sells it high-tech weapons and, occasionally, a high-ranking politician visits on what looks very much like an official trip.

It’s apparent that it would take nothing for this flimsy show, designed to guarantee the status quo, to fall apart.