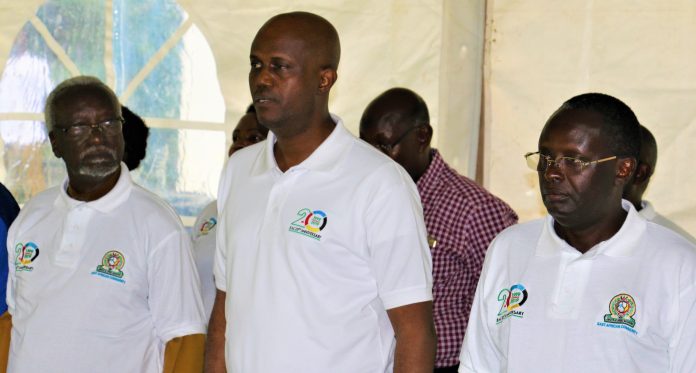 The East African Community (EAC) celebrated 20 years of regional integration since it was revived on 30th November 1999, the community had collapsed in 1977 due to disputes between the member states of Kenya, Uganda and Tanzania.

The Community was revived 22 years after its collapse in 1999 when the treaty establishing the regional bloc was signed, however the regional integration agenda has taken another direction as simmering conflicts between member states over shadowed the 20 year celebration.

“We need a president like Mwalimu Julius Nyerere who can stand up…I appeal to president Magufuli and Uhuru Kenyatta to take on we should not wait to go to Angola while we can solve the problems here,” said Musamali Paul a law maker from East African Legislative Assembly.

The EAC Heads of State Summit which was slated for 30th November in Arusha was postponed until early next year, the Secretary General Amb. Liberat Mfumukeko said that the decision was made on the request of one of the partner states.

“Our first attempt to have EAC we know what happened and what we went through so we should make sure we don’t go back,” said Uganda’s EAC minister Kirunda Kivejinja.

This comes as tension between Uganda and Rwanda has escalated mainly at the two country’s common border, Rwanda accused Uganda of arbitrary arrest, torturing Rwandese living in Uganda and sheltering enemies of Kigali. Uganda accuses Rwanda of spying and carrying out targeted attacks on Ugandan officials.

Burundi has also not been in good terms with Rwanda since 2015 when Burundi accused Kigali of taking part in the May 2015 failed coup to oust the incumbent president Pierre Nkurunziza.

In return Rwanda Rwanda accuses Burundi of sheltering the FDLR rebels accused of committing the 1994 genocide.

Tension between Burundi and Rwanda bordering community escalated last week as Burundi reported two armed attacks in less than a month including on its military position in Cibitoke.

Gitega has now heavily deployed military in Cibitoke province located in the North Western part of the country which shares border with Rwanda, accusing neighboring Rwanda of being behind the attacks.

Apart from expanding in membership from the original three Partner States in 1999 to the current six Partner States today, the Community has made several achievements in diverse sectors. These achievements on the whole have served to make the region more attractive for investment and thereby raised the living standards of East Africans.

Under the Customs Union, the Community has recorded several achievements in Intra-EAC trade from US$2.7 billion in 2016 to US$2.9 billion in 2017 and to US$3.3 billion in 2018; resolution of  multiple Non-Tariff Barriers (NTBs) to trade by the Partner States; establishment of 13 One-Stop Border Posts (OSBPs) to facilitate cross-border movement of goods and persons reducing clearance time and transit costs of goods and persons at EAC borders, and; implementation of the EAC Single Customs Territory which has resulted in drastic reduction in the period taken to clear goods (from over 20 days to three [3] days on the Central Corridor and from 21 days to four [4] days on the Northern Corridor).

Under the East African Monetary Union Protocol, Partner States are in the process of harmonizing critical policies and establishing required institutions to attain a single currency for the region by the year 2024. Plans are at an advanced stage to put in place the East African Statistics Bureau.

In efforts to ease cross-border travel and trade, EAC has fully operationalized and trained personnel at 13 One Stop Border Posts (OSBPs) that are aimed at facilitating trade and free movement of goods in the region.