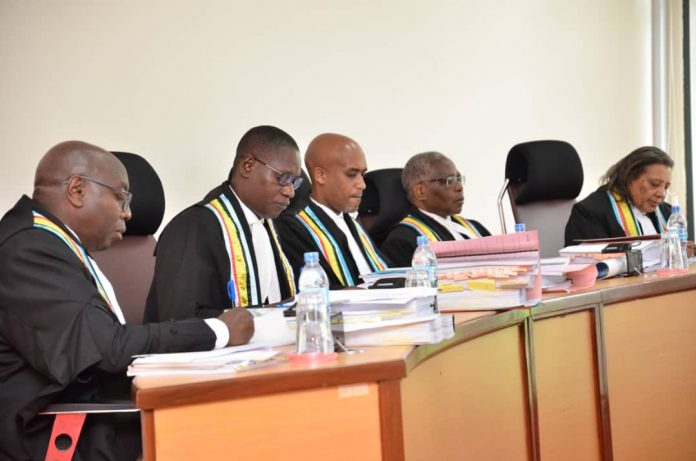 EACJ Judges during Burundi’s appeal on the election of the EALA speaker in Arusha Tanzania on Thursday 20th 2019. PHOTO| BurundiTimes.

After Burundi lodged an appeal in the East African Court of Justice (EACJ) on August 26th. 2019 on the election of the East African Legislative Assembly Speaker (EALA) Martin Ngoga, the hearing of the appeal took place this Thursday February 20th in Arusha (Tanzania).

This comes after the First Instance Division of the regional court dismissed the case last year citing lack of enough evidence, “when the attorney general of Burundi came to the court in the first instance he did not have any evidence so the matter was dismissed because all the affidavits which had been filed to support the case were ruled to be defective,” said lawyer Justin Semuyaba.

Mr. Semuyaba argued that the current EALA speaker was legally elected into the office as all members who had sworn in were present despite not taking part in the voting.

“Now we have to wait for the ruling of the court because the court has heard from both sides so lets wait,” said Mr. Semuyaba.

Burundi and Tanzania are the two EAC countries that didn’t take part in the voting exercise leaving Uganda, Rwanda, South Sudan and Kenya to proceed with speaker’s election in 2017.

In the ruling of the First Instance Division in July 2019, the court dismissed the reference for reasons and that the applicant did not prove before the Court if the election of the Speaker of the 4th Assembly was indeed fraught with the absence of requisite quorum. Consequently, the Court was not satisfied that the election of the 4th Speaker contravened Articles 53(1) or 57(1) of the Treaty establishing the East African Community or Rule 12(1) of the Assembly’s Rules of Procedure.

“As the treaty is clear and at the first instance division there was a violation of law so the essential part is what we want to be determined by the court is the respect of the law,” said Vyizigiro Diomede a Burundian state attorney who represented the Attorney General of Burundi.

According to Article 53 of the EAC treaty the Speaker of the Assembly shall be elected on the rotational basis by the elected members of the Assembly from among themselves to serve for a period of five years.

However Burundi and Rwanda entered into the East African Community at the same time in 2007, which meant that one of the member state was to concede or both go into elections.

Due to the already sour relation between the two countries, neither Burundi nor Rwanda could concede the position to the other.

Burundi Rwanda relation deteriorated since 2015 when Rwanda accused Burundi of sheltering the FDLR rebels who are accused of committing the 1994 genocide against the Tutsi.

In return Burundi accuses neighboring Rwanda of masterminding the 2015 failed coup to oust the incumbent president Pierre Nkurunziza.
The EACJ is expecting to make a ruling after a notification sent to both parties.