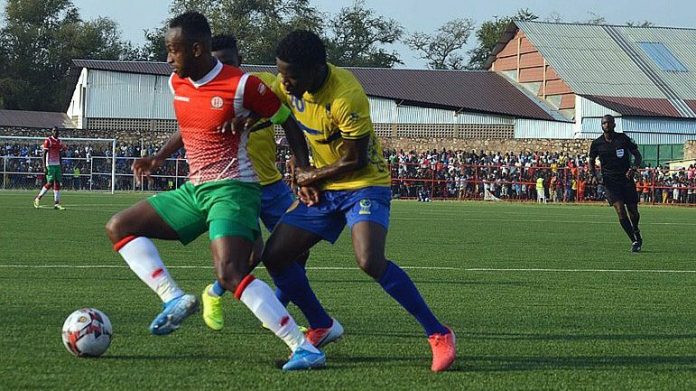 Burundi talisman Saido Berahino taking on Tanzania defenders during the first round of CAF qualifiers for the FIFA World Cup 2020 in Bujumbura on Wednesday 4th. 2019. PHOTO|FILE

The Burundian national team the Swallows (Intamba mu Rugamba) had to settle for a draw in a late drama with Tanzania’s Taifa Stars at Intwari stadium in Bujumbura.

The first round of CAF qualifiers for the FIFA World Cup Qatar 2022 features 28 teams competing for 14 slots in the group stage, where the 26 top-ranked teams await.

As the first leg of the first round of CAF qualifiers for the FIFA World 2022 kicked off in Bujumbura’s Intwari stadium, Cedric Amissi’s opening goal only gave a two minutes joy to the hosts Burundi only to be cancelled out by Simon Msuva in the 84th minute.

A defensive error between Burundi’s goalkeeper Jonathan Nahimana and Frédéric Nsabiyumva freed Simon Msuva on the left flank of the pitch to tuck in an empty net.

With already Frédéric Nsabiyumva under pressure in a count attack made by the Taifa Stars on a two against two, Burundi’s goal keeper Nahimana moved out of the box to clear the ball only for Frederic’s header passing over the goalkeeper leaving an empty net for the Tanzanian striker Msumva to tap in an empty net.

“It is so unfortunate and disappointing to see how we conceded the goal in the dying minutes but we are optimistic of the second leg,” said one of the Intamba mu Rugamba fans in Bujumbura.

The match between Burundi and Tanzania had a slow start but both teams gained the momentum as the match headed towards the end, in the 17th minute of the first half Burundi’s defensive error almost coasted the hosting side only for the Swallow’s goalkeeper Nahimana to pullout a brilliant save to deny the visitors an opener.

However Burundi also came closer at the 29th minutes when Burundi’s Saido Berahino put Tanzania’s goalkeeper under pressure resulting to a poor clearing of the ball, Cedric Amisi failed to convert the ball into an empty net just outside the 18 yard box opting to play Berahino who was already on an offside position.

Burundi is expected to lock horns with Tanzania’s Taifa Stars next Sunday in Dar es Salaam in a return leg, with the winner booking a place in the group stage of the second round for the qualifiers for the FIFA World Cup Qatar 2022.

The first round of the qualifiers for the FIFA World Cup 2022 is expected to take place between 4th and 10th September 2019.

The FIFA World Cup 2022 qualifying process was modified as round one having 28 lowest ranked nations play two-legged ties, round two the 14 winners from the first round will be joined by the other 26 African nations. Those 40 teams will be split into 10 groups of four teams, with the group winners advancing to the final round.

And finally round three the 10 group winners will be drawn into head-to-head, two-legged ties for one of the five places at the World Cup, the third round fixture is expected to the played in November 2021.