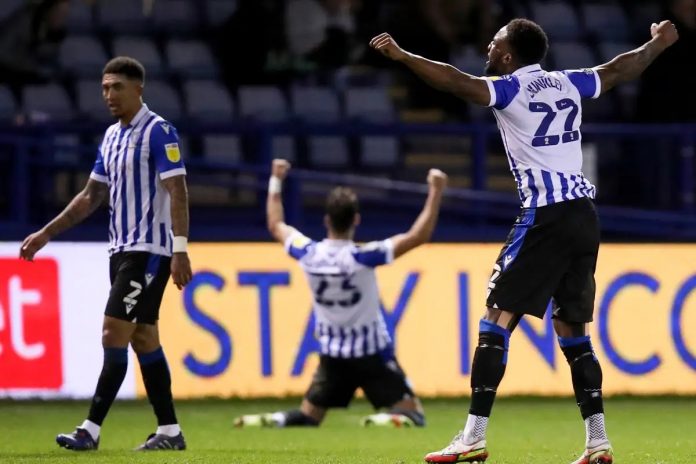 Saido Berahino has scored his third hat-trick in English football with one each coming in the league, League Cup and FA Cup, the Burundi’s Intamba mu rugamba’s talisman in the same game scored his first brace in English league football for six years and 298 days, since doing so for West Bromwich Albion against Chelsea in May 2015.

Saido Berahino was on song thrice as Sheffield Wednesday mauled Cambridge United 6-0 in a League One encounter on Saturday.

The Burundi international treble – his third in English football – was enough to help Darren Moore’s men continue their push for a Championship spot.

Still fresh from their 3-1 loss to Lincoln City in their last outing – where Berahino scored his side’s only goal – the Owls welcomed the Amber Army to Hillsborough Stadium, aiming to return to winning ways.

A sixth-minute own goal by Lloyd Jones set the tone for a tough evening for United – who have now failed to win any of their last matches in all competitions.

The home team doubled their advantage in the 10th minute through Barry Bannan before setting up Berahino in the 37th minute of the goal-laden first half.

Four minutes later, the former West Bromwich Albion forward completed his double. Goalkeeper Dimitar Mitov had produced a smart save to keep out Lee Gregory – albeit, the rebound fell in the path of the African who smashed home from close range.

Two minutes into the second half, the harvest of goals continued as Berahino set up George Byers. The 28-year-old scampered down the right, cut inside before teeing up the Englishman.

Berahino’s devastating performance was rewarded on the 54th minute when his near-post strike curled audaciously against the post and crept over the line to secure the match ball.

With that, he has now scored his third hat-trick in English football, with one each coming in the league, League Cup and FA Cup.

Substitute Florian Kamberi nearly grabbed a seventh for Moore’s men moments later when he was picked out from a sublime long ball – the first touch was delicate, but he could not get the accuracy as Mitov met the low attempt.

Berahino was subbed off in the 72nd minute for Sylla Sow while Nigeria prospect Dominic Iorfa was brought in for Sam Hutchinson two minutes before the hour mark.

Prior to the defeat, Cambridge manager Mark Bonner had raved about the growth of the Abbey Stadium outfit.

“When you look at the progress of the club over time, I think you can point to the significance of this week,” he told the media.

“It’s a great standpoint of where we have come from and where we’ve got the potential to go to.

“We’ve just purchased the Abbey stadium, as well as making real progress on improving and developing the training ground to really be able to cement our position in this division as well as for us to keep moving forward and keep developing players.”

Thanks to this comprehensive victory, Sheffield Wednesday climbed to seventh in the log after garnering 64 points from 36 matches as Cambridge occupy the 15th spot with 45 points from the same number of outings.