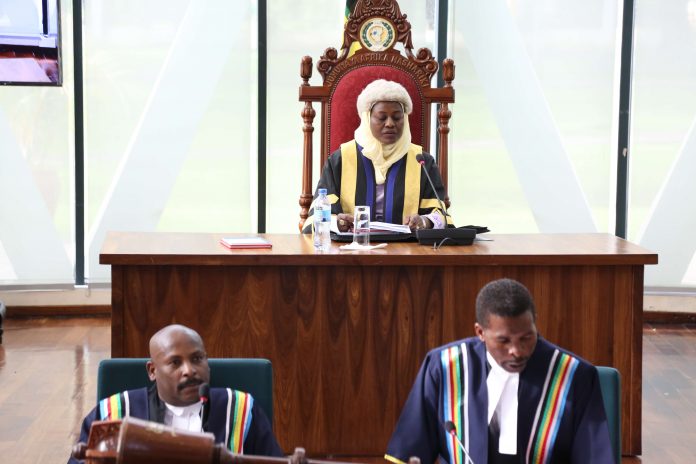 The East African Legislative Assembly (EALA) has this Monday February 24th elected Burundi’s Leontine Nzeyimana as the Chairperson to preside over the Regional Assembly sittings in the absence of the substantive speaker Martin Ngoga.

In a secret ballot Burundi’s law maker and former EAC minister Leontine Nzeyimana won the elections by 27 votes against 18 of Rwanda’s Fatuma Ndangiza.

“I would like to thank the members for putting trust in me and also thank those who didn’t vote for me as we are a house united,” said Leontine Nzeyimana after her election.

According to the East African Legislative Assembly Rules of Procedure for the election of a member to preside at the sittings of the assembly in the absence of the speaker, Annex 3 (4) indicates that if more than one member has been duly nominated the presiding officer shall call for a vote by show of hands.

However this wasn’t the case as the legislatures suspended the rule and agreed to vote through a secret ballot as they believed the show of hands could lead to controversy, “both of the contestants are our good friends so when we vote by show of hands it may have an implication on our relations so it is better we vote secretly,” Tanzanian law maker Abdullah Hasnuu Makame moved a motion.

“I have been elected by the members to conduct business for these two days this shows that members trust me and believe I can lead them and it really made me proud,” said Leontine Nzeyimana who is expected to sit in for Martin Ngoga as the speaker of the regional assembly for two days.

Leontine had earlier contested for the speakership from the Republic of Burundi in 2017 against Rwanda’s Martin Ngoga, as the Speakership is on a rotational basis within member states the case became peculiar since both Rwanda and Burundi joined the community in the same year.

Burundi believed it was its turn to occupy the position and Rwanda argued the same hence resorting into elections, the elections saw two countries of Burundi and Tanzania boycotting the process.

Burundi last week appealed in the East African Court of Justice on the Election of the current Regional Assembly speaker Martin Ngoga of Rwanda, arguing that the election dating back in December 2017 violated the treaty establishing the East African Community as Both Tanzania and Burundi didn’t participate hence lack of quorum.

Both Burundi and Rwanda joined the East African Community in 2007, but the two country’s deteriorating relation since 2015 have seen the two EAC member states clashing on a regional level.