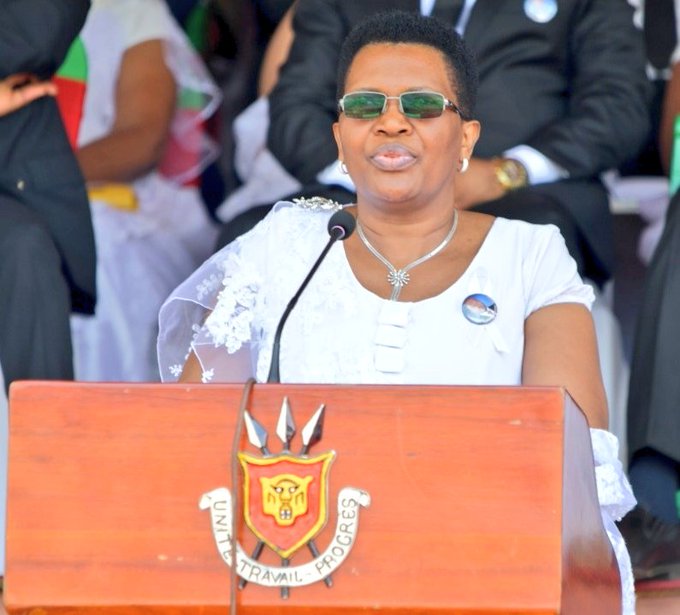 Burundi’s former first lady and wife to the late president Pierre Nkurunziza during the last journey of his husband called on mourners to trust God as everything is planned by the almighty.

“I thank God because he gave the family the strength to stand firm during this period we have been following the teachings of the bible and so was my late husband…there is time to die and there is time to live”, said Ms Nkurunziza.

Government officials, political party representatives, diplomats, special envoys and citizens gathered in Gitega to pay their last respect to the former president who passed away on June 8, 2020, according to the government the former leader died due to a cardiac arrest shortly after being hospitalized in a hospital in Karuzi province.

In his speech, Burundi’s president Evariste Ndayishimiye said that the country lost a good friend, the shield that protected Burundi’s dignity and that late Nkurunziza was an example of good leadership.

“We had never seen a president who took a hoe, who lifted stones, who taught his citizen, who shared same meal with his population while being humble and obeying God. He reminded us that all we have were given to us by God”, said Burundi’s president during the state funeral of Pierre Nkurunziza.

The death of former Burundi president shocked many Burundians two days after he was seen attending a volleyball match in Gitega, the late president was a Christian born again, sports man who loved to play football and spent most of his time in countryside.

While late Nkurunziza spent most of the time in countryside, village dwellers say that he inspired them to farm and boost the food production in the country while developing economically as small farmers.

While Burundi is getting to a new era, the late president’s legacy will remain in Burundian forever as many remember him as a man who brought back peace and stability in the country.