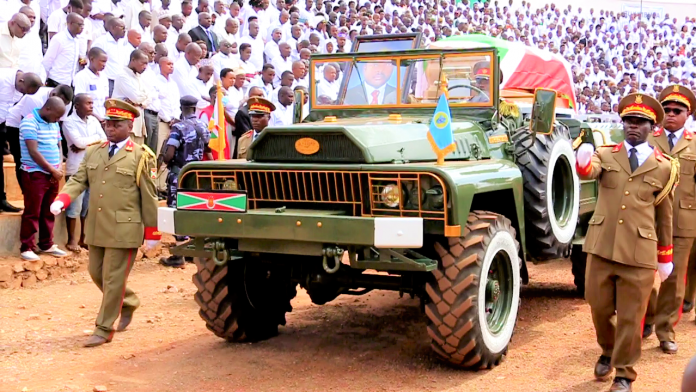 Burundi’s former president Pierre Nkurunziza’s remains were laid to rest on Friday June 26th 2020 in the country’s new political capital Gitega, late Nkurunziza died in Karuzi hospital after suffering from a cardiac arrest according to the government earlier this month.

“You have gone at a time when we still needed you but your legacy will be remembered among which is that we had put God first in everything,” said Burundi’s President Evariste Ndayishimiye.

President Ndayishimiye said the the country’s former president will be rembered for his fight for the interests of Burundians, “all Burundians should know his legacy and which will unite us together and our grandsons will benefit from this,” he added.

A procession started from Karuzi province in a hospital where he was being treated after feeling unwell on June 6th, the government said that his health had improved but the following day Monday June 8th his health deteriorated as he suffered a cardiac arrest.

Mourners gathered in the country’s new capital Gitega from all corners of the country wearing white tops and black pants, others wore all white clothes as they sat in Gitega’s Ingoma stadium to pay the last respect to the late Burundi’s former president Pierre Nkurunziza.

“I thank God for all what he has done and the way he has taken him away because we got a chance to bury him but as you know Burundian history how other leaders died,” said Denise Nkurunziza the wife to the late former president Pierre Nkurunziza while addressing the mourners in Gitega.

Late Nkurunziza’s remains were laid to rest in Gitega a few meters away from the Ingoma stadium, a place which was reserved for a monument to be built in the honor of the victims of the civil war that engulfed the country.

Burundi plunged in the ethnic civil war that led to decades of instability resulting to thousands of people losing their lives since the country gained its independence in 1962.

Late Pierre Nkurunziza was expected to end his term this August making him the first ever Burundi president to rule the country for 15 years.

He was also the first Burundi president to peacefully and democratically hand over power since the country gained her independence in 1962 after publicly declaring in 2018 that he will not seek for another term despite being legit in the country’s 2018 constitution.

“We will never forget him he brought peace to the country he was not just a president to us but a father,” said one of the mourners in Gitega.

The former Burundi president was honored with a state funeral including a 21 cannon salute where mourners witnessed the emotional last journey of their former president.

During President Pierre Nkurunziza’s 15 year rule he faced resistance in 2015 when he vied for another term in the office.

Thousands fled the country and hundreds lost their lives during the political crisis, critics say that his move to vie for another term violated the country’s constitution that limited a president to run for more than two terms in the office.