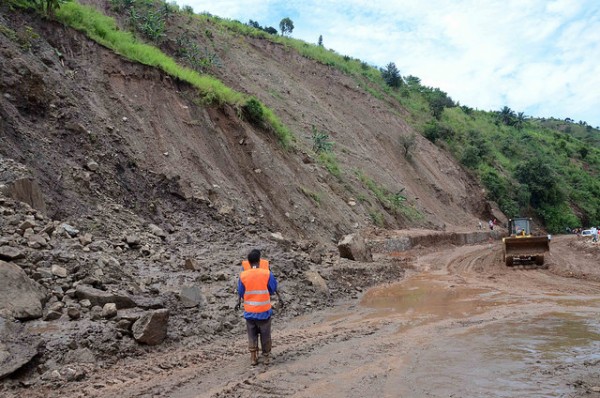 One of the landslides near the RN3 road to Rumonge province from Bujumbura in April 2015. Photo: Burundi presidency

At least 26 people have been confirmed dead and other seven were injured after a landslide in Burundi’s Cibitoke province located in the north-western part of the country.

“There was a landslide yesterday 04 December 2019 around 16h local time in Mugina commune following heavy rains are currently at 26 but other 10 people are still missing,” said Burundi’s police spokesman Pierre Nkurikiye.

Burundi government said that the operations are still ongoing to determine the exact number of people perished in the landslide and property loses.

According to the United Nations Office for the Coordination of Humanitarian Affairs, more than 3,100 people in Burundi were affected by torrential rains in Munyinga resulting to two people losing their lives earlier this year.

This comes at a time when East African Community is expected to set up Urgent response fund for floods and environmental disaster victims.

The East African Legislative Assembly (EALA) has called on the regional heads of state to put in place an urgent response fund for floods and environmental disaster victims in the community.

While addressing the parliament Mathias Kasamba a member of the Regional Assembly said that it was critical to adopt early warning mechanisms, adaptation measures and mitigation measures which will minimize the fatality risk of human lives.

“Time has come in to look at how do we finance emergency situations not only at national level but on the regional… we don’t have a disaster committee at regional,” said Mathias Kasamba a regional law maker from Uganda.

The move comes at a time when the region is experiencing floods that has claimed almost 300 lives this year according to the UN Office for the Coordination of Humanitarian Affairs (UNOCHA).

Across the region, homes, infrastructure and livelihoods have been destroyed and damaged in the hardest-hit areas, and the risk of communicable diseases including cholera is rising.

Kenya recorded more than 132 deaths due to floods caused by the increased rain from the month of October to December, including 72 who were killed by a landslide which buried their homes in West Pokot County.

In South Sudan more than 900,000 people have been affected by floods since June, and in Burundi 3,100 people were affected by torrential rains in Munyinga with already two people lost their lives.

Floods and landslides in Uganda have impacted at least 12 districts including Bundibugyo District, where more than 4,000 people were affected, earlier this week another seven people died after landslides swept several villages in eastern Uganda.

In Tanzania the death toll is currently over 50 including 10 people who were drowned by a flood-swollen river.

“We are going to study this for appropriate actions on the concerns about floods and environmental disasters this year we had people who lost lives and properties in the community,” said Olivier Nduhungirehe the chairman of the EAC council of ministers.

The community already has an EAC Climate Change Policy and Strategy and a climate change master plan for 2011 -2031 with the aim of addressing and guide preparation measures to address the climate change in the region.

A climate change bill is expected to be introduced in the East African Legislative Assembly by the community in the next financial year 2020-2021.

More than 250 people have been killed and three million affected by flash floods and landslides across East Africa, and about half of the deaths (120) have occurred in Kenya with more than 160,000 people affected.