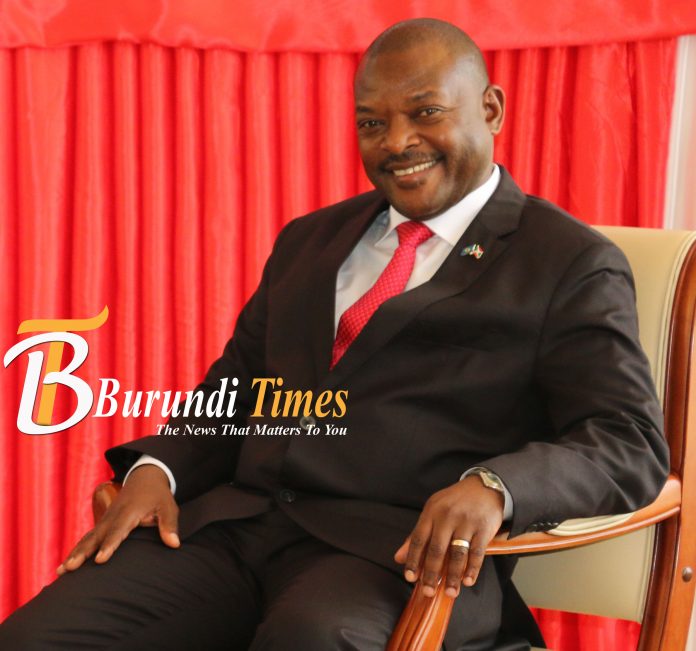 Burundi’s president Pierre Nkurunziza on Tuesday marked four years since he was sworn in for another five year term that runs until 2020, the 2015 re-election of the incumbent president had sparked a political crisis in the country after the ruling party CNDD-FDD announced him as the Party’s flag bearer.

Burundi’s ruling party argued that the president was eligible to contest since his first term in 2005 did not count, as he wasn’t elected directedly by the people as required by the 2005 constitution.

However critics believed that the incumbent president violated the then constitution that limited the president to run for more than two terms in the office.

“We are satisfied with the progress made in implementing our agenda as we took over the office among which was peace, stability and justice for all,” said president Nkurunziza.

“Other projects that we promised and are yet to be realized will be implemented by our successors,” he added.

The statement comes after he publicly announced in June 7th 2018 not to contest in the next year’s general elections after serving his term that ends in 2020.

According to the current constitution, article 97 indicates that “the president of the republic is elected directly by universal suffrage for a renewable term of seven years. And no one may serve more than two consecutive terms.”

Burundi will be organizing its first ever general elections funded by citizens next year, after European Union and US suspended direct aid to the government citing gross human rights violations in the 2015 political crisis.

“Next year’s election will be well organized and peaceful than before… since it is funded by citizens themselves,” said president Nkurunziza.

In 2017 Burundi government called on citizens to voluntarily contribute to the 2020 general elections after key donors including the European Union and the United States suspended direct aid to the Burundi government.

As Burundi celebrated 57 years since the country gained its independence in 1962, Burundi president ordered for the halt of contributions to the 2020 elections as the intended amount was met.

In the buildup of 2020 elections some opposition members in the country expressed concerns of harassment, arrests and intimidation of their followers’ country wide.

“We won’t be discouraged we should remain calm and focus on our vision that is making democracy and peace prosper in this country,” said Agathon Rwasa an opposition leader of National Congress for Liberty (CNL).

Agathon Rwasa’s comments comes after his political party offices in the country were allegedly smeared with human faeces by those opposed to them, a move the party said was an effort to discourage supporters in the upcoming elections.