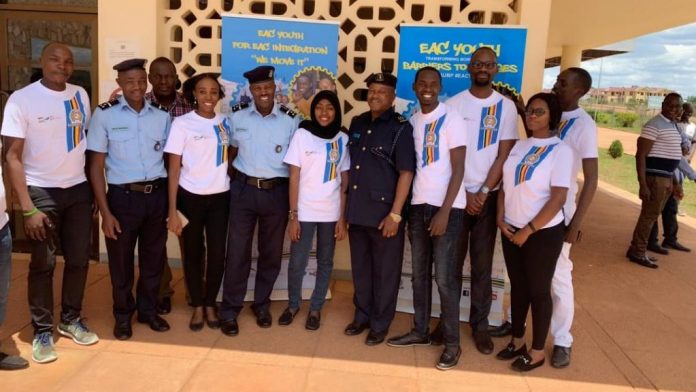 Youth Ambassadors with border officials at Kobero/Kabanga border during the sesitisation programme on the movement of goods,services and people in the region. PHOTO|FILE.

The East African Community Youth Ambassadors are undertaking a multi-stakeholder outreach programme that kicked off yesterday targeting the border communities in some of the East African partner states. The aim of the sensitisation programme is for the youth to sensitise local leaders, border agencies on issues hindering regular cross border movements and threats linked to irregular movements such as smuggling or trafficking.

The two-day sensitization programme  aims at establishing partnerships with relevant actors at the local level to maximise on the mitigation possibilities to simultaneously increase access to opportunities presented in the EAC Common Market for young people through better management and secured cross border movements.

This comes after the latest figures released by the East African Business Council showed there was a significant decline in the intra-regional trade.

The regional business council said that the decline of the country’s trade with member states is as a result of decline in volume of both imports and exports.

The sensitization program will is aimed to seek to achieve and understand the limiting factors for border management officials in curbing migrant smuggling and trafficking challenges at the borders.

And share, exchange information about opportunities available in the EAC for young East Africans to legally benefit from the region and vice versa.

The programme is attended by Representatives of Border Security and law enforcement agencies; Members of the immigration border control; representative of the Ministry of EAC Affairs from each Partner State; the District Youth leadership; the current EAC Youth Ambassadors, Alumni, youth Representatives and the border communities with emphasis given to youth.