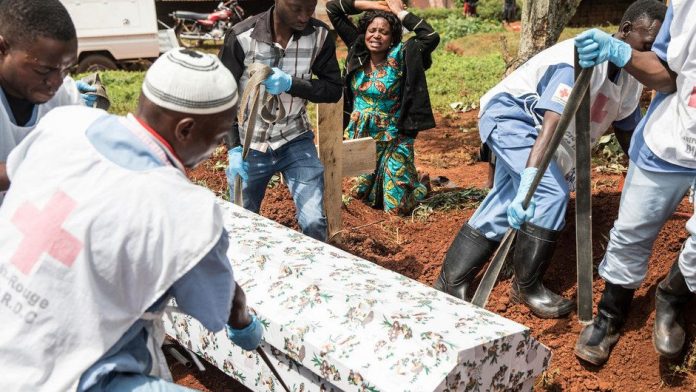 As part of the response to the outbreak of Ebola, the Red Cross has been working with the World Health Organization (WHO) and the Ministry of Health of the Democratic Republic of the Congo (DRC) ensure safe burials to help stop the spread of the deadly disease. (August 2019). Photo| Martine Perret, UN

Since the Ebola epidemic struck in the north-east of the Democratic Republic of the Congo (DRC) one year ago, almost 600 of around 850 children who have caught the virus have now died, the UN Children’s Fund (UNICEF) reported on Friday.

“The news that the total number of deaths has now passed 2,000, out of more than 3,000 cases, should act as a rallying cry for us all to step up our efforts to defeat this terrible disease and end this outbreak,” the Agency’s statement said.

“As the numbers continue to grow, it is vital to remember that each one of these cases is somebody’s child, a son or daughter; a mother, father brother or sister,” the announcement read. “Each of these deaths leaves a family not only in mourning but also scared and worried about their own exposure to the disease.”

UNICEF noted recent breakthroughs in finding successful treatments highlight that “for the first time, we now have the means to both prevent and treat Ebola.” Recent media reports show the disease is no longer incurable, with scientific advancements promising to tame outbreaks and boost survival rates.

Medical advances however, “mean little” if infection goes undetected, or “if individuals are too scared to seek treatment.”

The DRC’s northeast region has seen several attacks on Ebola treatment centres by armed groups, and in some cases, strikes specifically targeting people working to counter the virus. A deadly environment with added social and political crises could reverse progress made in treatment and prevention.

This Ebola epidemic, categorized by the World Health Organization (WHO) as International Public Health Emergency in July, has affected more children than in any other previous outbreak, and the virus “ravages children in ways that are very different from adults,” UNICEF said.

As such, treatments for young persons are specialized. “UNICEF is working with partners to meet children’s immediate and longer-terms needs, accompanying them and their families every step of the way,” the Agency said.

Ebola outbreaks are unique in the “exceptional level of investment” needed to combat them, UNICEF explained. “They require 100 per cent of cases to be treated, and 100 per cent of contacts to be traced and managed.”

UN Secretary-General António Guterres will travel to impacted areas on Saturday in an expression of solidarity with victims and families fighting the epidemic.

Of the 126 million dollars needed meet the needs of children and communities, UNICEF has so far funded 31 per cent of its appeal.

“The reality is that we need far more international support now.”

As the number of infected continue to climb in the DR Congo, a new case of the disease was identified in nieghbouring Uganda, WHO revealed on Friday. The child, a nine-year-old Congolese girl, tested positive in Uganda and traveled to the DRC for treatment.

Briefing journalists in Geneva, WHO spokesperson Fadela Chaib confirmed the child, had been stopped in a routine border check at Mpondwe in western Uganda, reportedly on Wednesday.

Amid reports that she had died, the WHO spokesperson explained that the girl was clearly extremely poorly when health officers stopped her.

In June, two other individuals died from Ebola in Uganda after crossing the border from DRC. A third individual from the same family died after being he was sent back to DRC.

Asked about the dangers of transmission within Uganda, Ms. Chaib emphasized that Ugandan officials had acted quickly to limit the risks of the disease spreading and had the expertise to minimize contact with the infected patient.