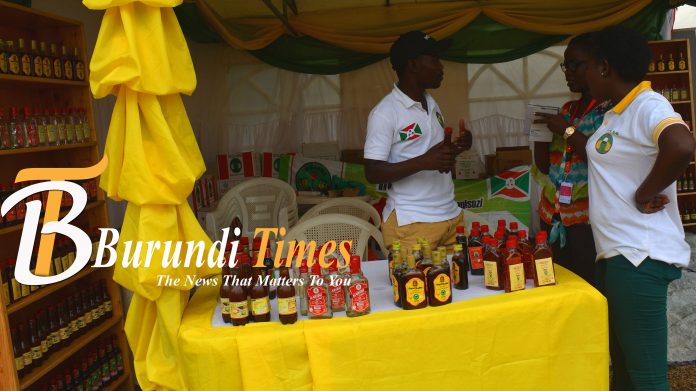 A Burundian trader explaining to some of his customers about his locally manufactured products on August/30/2019. PHOTO| BurundiTimes.

Under the auspices of the Tanzanian embassy in Burundi, a four day trade fair was officially opened in Bujumbura this Friday with the aim to share experience and network between traders of the two East African Countries.

“It is an opportunity for Burundi and Tanzanian economic operators to share experience and build a network to discuss the business relations that already exist”, said Burundi’s minister for trade Jean Marie Niyokindi.

According to the Burundian government 40 percent of the imports from the East African Community member states originates from Tanzania, products imported from Tanzania mainly iclude salt, rice and corns.

Mr. Niyokindi urged Burundians to increase the trans-border trade with neighboring Tanzania taking advantage of the geographical location, “we only need to remove the non-tariff barriers and develop such trade. Burundi and Tanzanian who are gathering in this trade exhibition will discuss it and establish a real trade facilitation framework”, he added.

In 2017 Uganda and Kenya were the main destinations of Burundi’s exports accounting for 41 percent and 34 percent of total intra EAC domestic exports respectively, the key commodities included coffee, soap and oil seed.

Edmund Juma the Deputy Ambassador of Tanzania in Burundi noted that the trade exhibition aims at strengthening commercial relations between Burundi and Tanzania. “We are confident that it is a good opportunity for both countries to share experience, identify challenges and find solutions”, he said.

Mr. Juma urged Burundian business operators to invest in Tanzania specifically in tourism sector as “Kigoma is quite close from Burundi”.

Despite Burundi’s main imports coming from Tanzania, traders raised concern over the cumbersome procedures and Non-Tariff Barriers that continued to exist through the central corridor which hinders the free movement of goods.

“We were informed very late about this trade fair and others are on their way to Burundi”, said a Tanzanian businessman citing the increased number of NTBs on his way to Bujumbura.

“Burundian authorities should double efforts to eliminate the NTBs and find solutions to ease the free movement of goods”, said a Tanzanian trader.

About 50 stands were installed at “Cercle Hypique ” in Bujumbura City for the Tanzania-Burundi Trade Fair with 20 of stands already occupied by around midday on the exhibition’s first day.