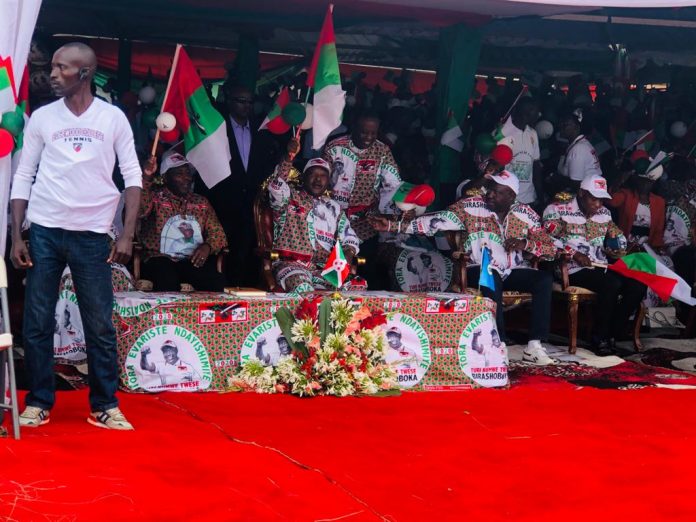 Burundi president Pierre Nkurunziza with the presidential candidate Evariste Ndayishimiye during the launching of the campaigns in Gitega (Bugendana). PHOTO| BurundiTimes

Burundi political parties and independent presidential candidates kicked off the campaigns for the presidential elections that are expected to take place next month.

Thousands of supporters gathered to support their candidates for the presidential and Legislative seats.

“I will not settle until I see all Burundians can be able to afford meal and employed,” said Evariste Ndayishimiye the CNDD-FDD presidential candidate.

Mr. Ndayishimiye said that he will mainly focus on empowering farmers so as they can afford better schools and basic needs for their families.

The rival party CNL which is led by Agathon Rwasa started the activities in Ngozi.

Thousands of militants from all corners of the country gathered to  back their candidates ahead of the much awaited  presidential elections.

Rwasa’s CNL and CNDD-FDD are they main contenders for the presidential seat in the upcoming elections.

“The campaigns kicked off well though we had a few challenges in regards to transportation of our supporters,” said Agathon Rwasa after day 1 of the campaigns.

Burundian diaspora will miss out voting due to the COVID-19 pandemic.

In a correspondence signed by the ministry of foreign affairs, the Burundians in diaspora were informed due to counterpart health-measures to fight coronavirus in different countries, bureaus movements are impossible, then the national commission in charge of election is unable to organise polls abroad.

On the calendar set by the electoral commission , the campaigns will last for 21 days ending on May 17, 2020 after which period no other propaganda will be allowed.

Burundi’s political parties are in a race to find the replacement of Burundi’s president Pierre Nkurunziza after being in power for 15 years.