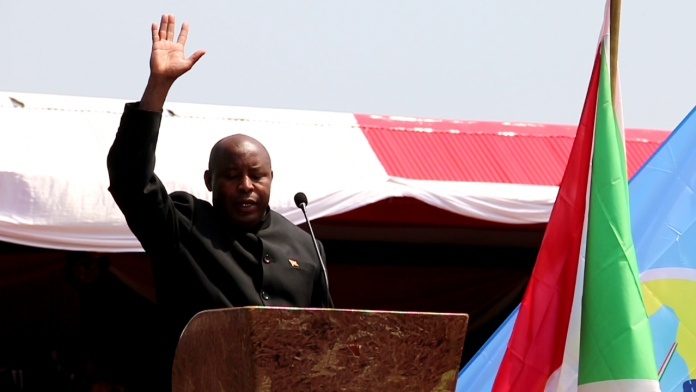 During his maiden speech in the country’s political capital Gitega, President Ndayishimiye said that all Burundians are equal with no exception. PHOTO|Burundi Times.

During his maiden speech in the country’s political capital Gitega, President Ndayishimiye said that all Burundians are equal with no exception.

“From today I want you to refer me as your president so let it be politicians, Organisations or individuals should get ready. From now on no need of failing to speak out because it is your right the government is like a parent,” said Burundi’s president.

Evariste Ndayishimiye who won the May 20th presidential elections succeeded the late president Pierre Nkurunziza whose term was to end in August.

Burundi’s former president Pierre Nkurunziza died earlier this month in a hospital in Karuzi, the government said that the former president suffered from a heart attack which resulted to his death.

Burundi was expected to witness its first peaceful, democratic transition of power but the late president Pierre Nkurunziza’s unexpected death shocked the country and prompted President Evariste Ndayishimiye to swear in two months earlier than expected.

President Ndayishimiye who won the May presidential elections was expected to take oath on August 20, 2020. But as Late Pierre Nkurunziza couldn’t finish his term the country’s constitutional court ruled for the president elect to swear in.

During the swear in ceremony in Gitega Burundi’s national, Unity and East African Community flags flied at half-mast in honouring the late president Pierre Nkurunziza.

“I pledge my devotion to the National Unity Charter, to the Constitution of the Republic of Burundi and to the law and I commit myself to dedicate all my efforts to the defence of the higher interests of the nation, to guarantee the national unity and the cohesion of the Burundian people, peace and social justice. I hereby undertake to combat any ideology and practices of genocide and exclusion, to promote and defend the individual and collective rights and freedoms of the individual, citizens, and to protect the integrity and independence of the Republic of Burundi,” said the Burundian president while being sworn in.

He is expected to be in the office for a term of seven years that will end in 2027.

Burundi plunged in ethnic civil war few years after gaining its independence in 1962 which led to decades of instability resulting to thousands of people losing their lives.

“In Burundi every family lost their members so we have to remember this so that what happened shouldn’t happen again,” said President Evariste Ndayishimye.