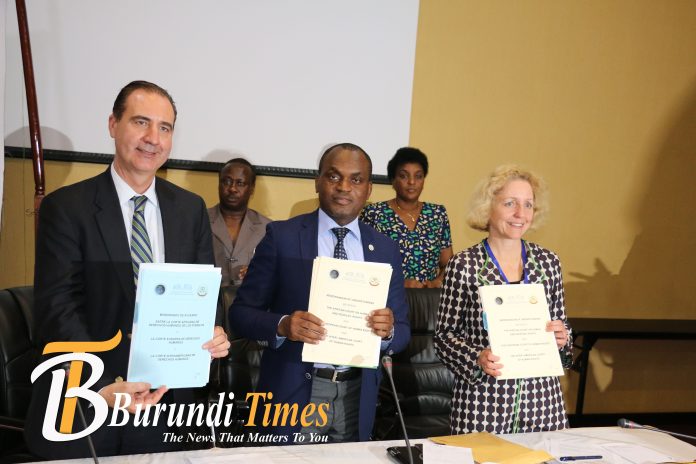 The African Court, European and inter-American court of Human Rights signed a memorandum of understanding in efforts to promote and protect human rights in the state parties. The cooperation signing comes as part of the efforts to establish a permanent forum for institutional dialogue.

“We are not thinking in little boxes like regional boxes but we all want to construct and building of Human rights for everybody everywhere,” said Angelika Nussberger the Vice Chairman of the European Court.

In Africa 30 countries ratified the protocol establishing the African court with only nine out of the 54 African states have submitted the declaration to the court.

In East Africa only Tanzania submitted the declaration while Rwanda withdrew its declaration hence stopping its citizens and non-governmental organizations to directly file complaint against it.

Only African Union member states that have submitted the declaration to the court, citizens or Non-governmental Organizations can file cases against the state in the continental court.

“We know where we can put our path in order to solve so many issues that we are dealing with like issues on implementations of the decisions, issues of ratifications and sensitizations,” said Sylvain Ore the African Court president.

The African Court indicated that there is lack of political will in African Union member states to ratify and make declarations to the African court, countries that are yet to submit declarations to the continental court their citizens or Non-Governmental Organizations cannot be able to access the court. The agreement signed by the three continental courts is expected to improve human rights protection and a move towards harmonization of court policies and decisions.

The MoU indicates areas of cooperation through joint actions to achieve their specific mandates to promote the respect for Human Rights in the state parties to their respective constitutive instruments, and ultimately universally.

Joint actions are expected to be taken under the agreement that is considered appropriate, and establish mechanisms for joint action on mutually agreeable conditions to advice on matters of common interest on case by case basis.

“Of course we should have a certain coherence harmonization of judgment. When you have that kind of jurisprudence you know where you are going and how you’ve reached to such a decision,” said African Court president Sylvain Ore.

With yet majority of African countries yet to ratify or submit their declarations to the court, many cases of Human Rights violations go unnoticed with victims left with no access to the court.