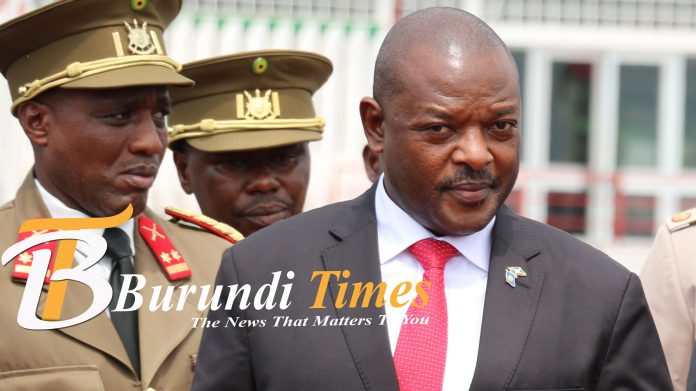 Burundi president Pierre Nkurunziza on 7th June 2018 announced that he will not contest in the next year’s general elections after serving his term that ends in 2020. PHOTO| Burundi Times

Burundi president Pierre Nkurunziza’s spokesman Jean Claude Karerwa has yet again fortified president’s stand ahead of next year’s elections, the spokesman was asked whether the president could rescind his decision of not contesting for the 2020 general elections that was made public last year.

“Some are saying that he should stay as a president of the country but it is normal that some people may love someone but this doesn’t mean he will stay in the office,” said Mr. Karerwa.

Karerwa’s comments comes after it emerged that during the country wide tour of the Peace Torch, a caravan chanted songs calling on the incumbent president to stay in the office for as long as he could.

“Those who chant can always chant and no one will stop people to sing and express their views but the president will not reverse his decision,” he said.

Burundi president Pierre Nkurunziza on 7th June 2018 announced that he will not contest in the next year’s general elections after serving his term that ends in 2020.

According to the current constitution that was promulgated last year, article 97 indicates that “the president of the republic is elected by direct universal suffrage for a renewable term of seven year. And no one may serve more than two consecutive terms.”

In 2015 Burundi president’s move to run for another term in the office sparked violence in the country as opposition argued that the incumbent violated the then country’s constitution.

The 2005 constitution limited a president to run for more than two terms in the office, however Nkurunziza supporters believed the president never violated the constitution as his first term in 2005 did not count since he was not elected directly by the people. But he was rather elected by the parliament, and the constitutional court had in 2015 ruled in his favor.